Think of spaces in newnormal

The 2020 coronavirus outbreak has caused the world to re-evaluate the idea of distance, of people and space.
As long as there is consciousness, there is a concept of space around it.
No matter how restrictive it becomes, people (consciousness) exist in places.
The idea of space from the present to the future will be found anew in the corona vortex!
It is impossible to create a richer and more comfortable environment without artistic thinking.

● Thinking about the future of spaces  ~-  Comedians in Kumamoto ~~

About 15 years ago in Kyushu, there were live comedy venues in slightly more glamorous cities like Fukuoka (Hakata), but they are slowly disappearing.
Mr.Ryoma Hoshino and Mr.Katura takemon wanted a place where they could present their “laughter”, which is not common in other prefectures, and that’s how they came up with the idea of creating a small stage in Kumamoto.
For the past 10 years, the “Young Salon Kobabeya” in Kumamoto has been one of the few places where local comedians who can’t go to Tokyo or the city can perform live.
The company continues to provide such a sparkling “place (space)” to this day.

Mr.Katsura Takemon used to be a comic actor but switched to rakugo-ka（Japanese traditional storyteller）, and now he is a rakugo performer with the Rakugo Art Association in Tokyo and performs all over Japan. He is still active in rakugo as a rakugo performer, performing at the Kumamoto Civic Center and other venues across Japan.
Mr. Pupley Fukagawa was working as a comedian in Osaka, but he moved his base of operations to Kumamoto two years ago.

I asked Mr. Ryoma Hoshino, who is at the center of the group, about his thoughts.People live to laugh “One smile a day”.
I want to bring something unique to Kumamoto to the world…

I would like to see the art scattered around the live music club and the small stage in this limited space.
I also wanted to enjoy the great potential of the collaboration between art and performers to create a unique and special place that I have never seen before.
Art is always there. The presence of art in the new normal world will never be hazy.
Even if the people and spaces of the future change, art will still exist and will be needed as long as it exists.

The term “alternative space” comes to mind when I talk about this kind of thing.

I would like to get more specific, but I would like to review what “alternative spaces” meant in the past when talking about spaces and art.
In the field of art, the land art of the 1960s is another example of a place where art appreciation has systematically broken away from the so-called white cube of museums and galleries.
Domestically, there is also a tendency to hold open-air art exhibitions that began in the 1950s as an anarchic cultural trend toward the social system as well as art.
There was also a movement to establish venues for exhibiting artworks of their own accord.

98 GREENE STREET, which began in 1969 in Manhattan’s Green Street with the support of art collectors, is
It was a meeting place for various artists such as Andy Warhol, Jasper Johns and Gordon Matta-Clarke.
Furthermore, Matta-Clarke opened an artist-run restaurant called FOOD in Soho in 1971 with several other artists.

These multipurpose spaces, such as museums and art galleries, which were not bound by the existing system, were called “alternative spaces” and became places that supported experimental activities.
A variety of alternative spaces have emerged in Japan as well, although they originated in the West.
To name but a few, the “Sagacho Exhibit Space” has provided many young artists with opportunities to present their work, and the “Sagacho Exhibit Space” is a space that is not limited to art, but also hosts a variety of other genre-less activities such as theater and music
BankART 1929, for example, is a good example.
Art critic Ren Fukuzumi has pointed out in the past that one of the major characteristics of alternative spaces is that they have become a kind of hangout for artists.

Yes, they are artists, too. As an “expression and performer of laughter,
We’re going to make Kumamoto a hangout for comedy and performer artists as a kind of base for their work.
It is Mr. Hoshino’s wish.

In the midst of the corona crisis, a prize race was held at Kobabeya.
I was able to participate and cover the event as a sponsor(kanaboom), which took place at a social distance and remotely. 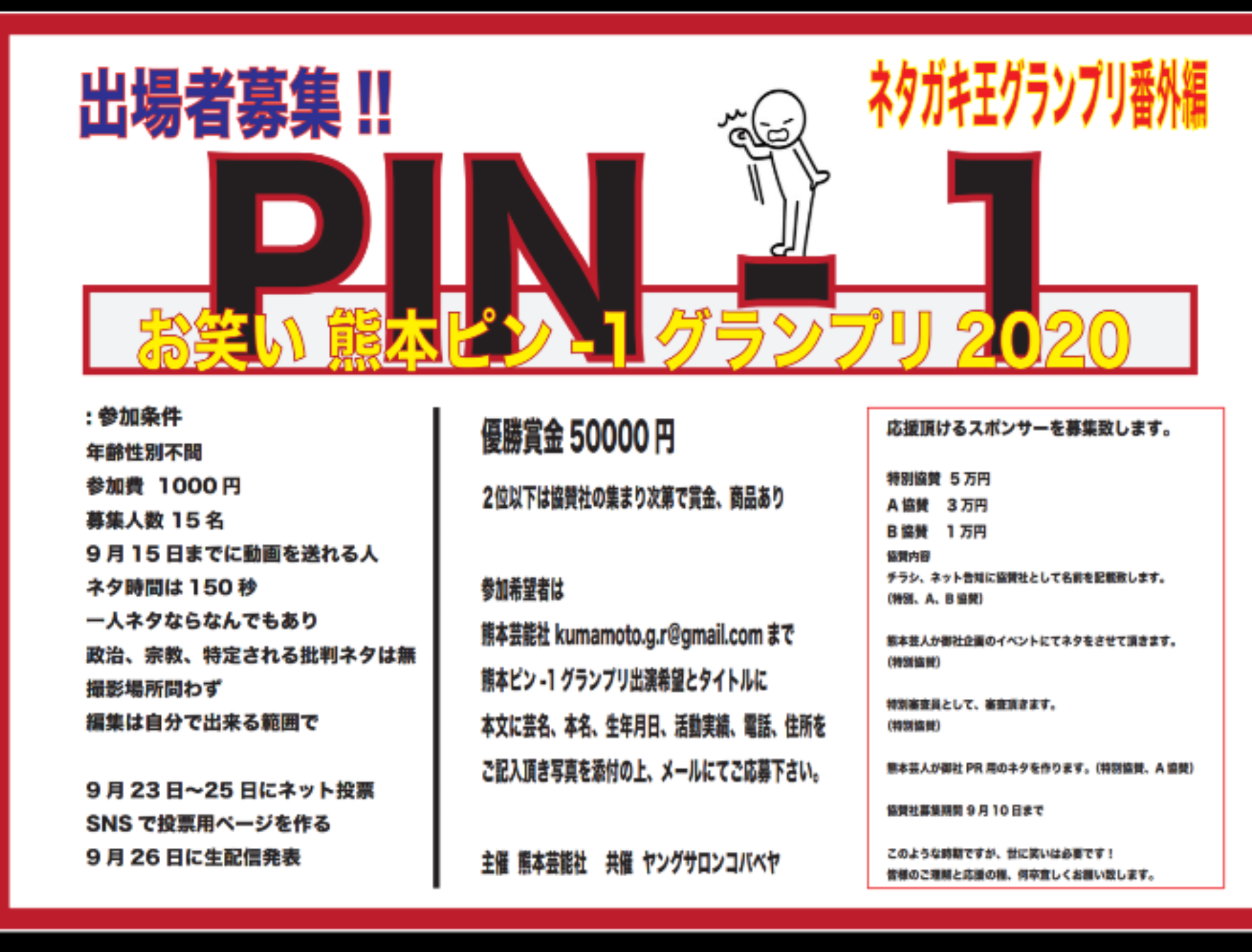 Support: Young Salon Kobabeya
●A channel where you can learn more about Japanese ramen and enjoy it. Check it out!
Kumamoto Ramen King Pupuri Channel

All comedians entered in the competition posted their stories on video and the stories were judged on the monitor.
The 24-hour live performance of the contestants, the PIN-1 Grand Prix was about to begin.
The event was held using the Internet under the social distance and hygiene management. The event was streamed live on SHOWROOM and broadcasted to the world. 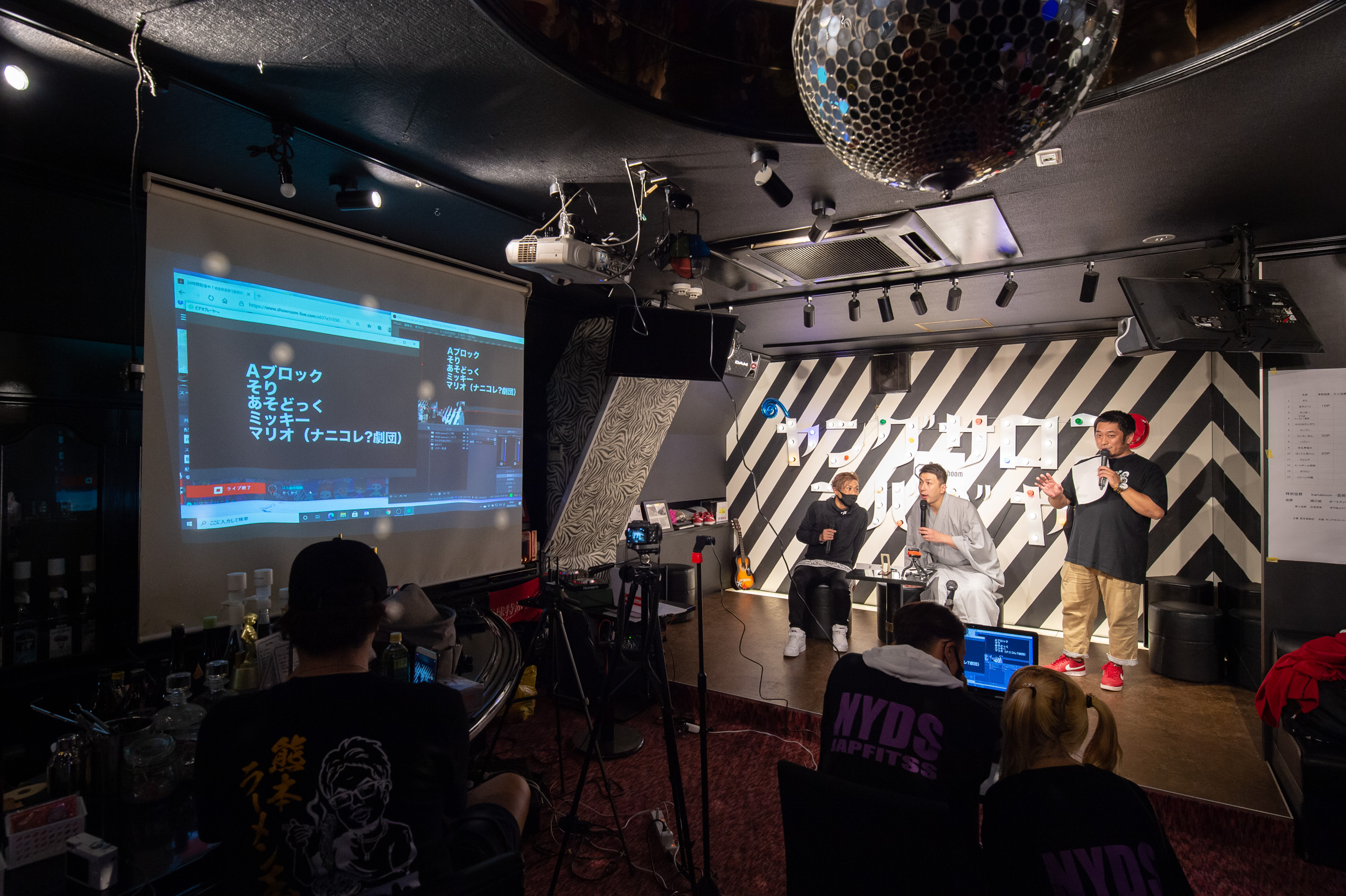 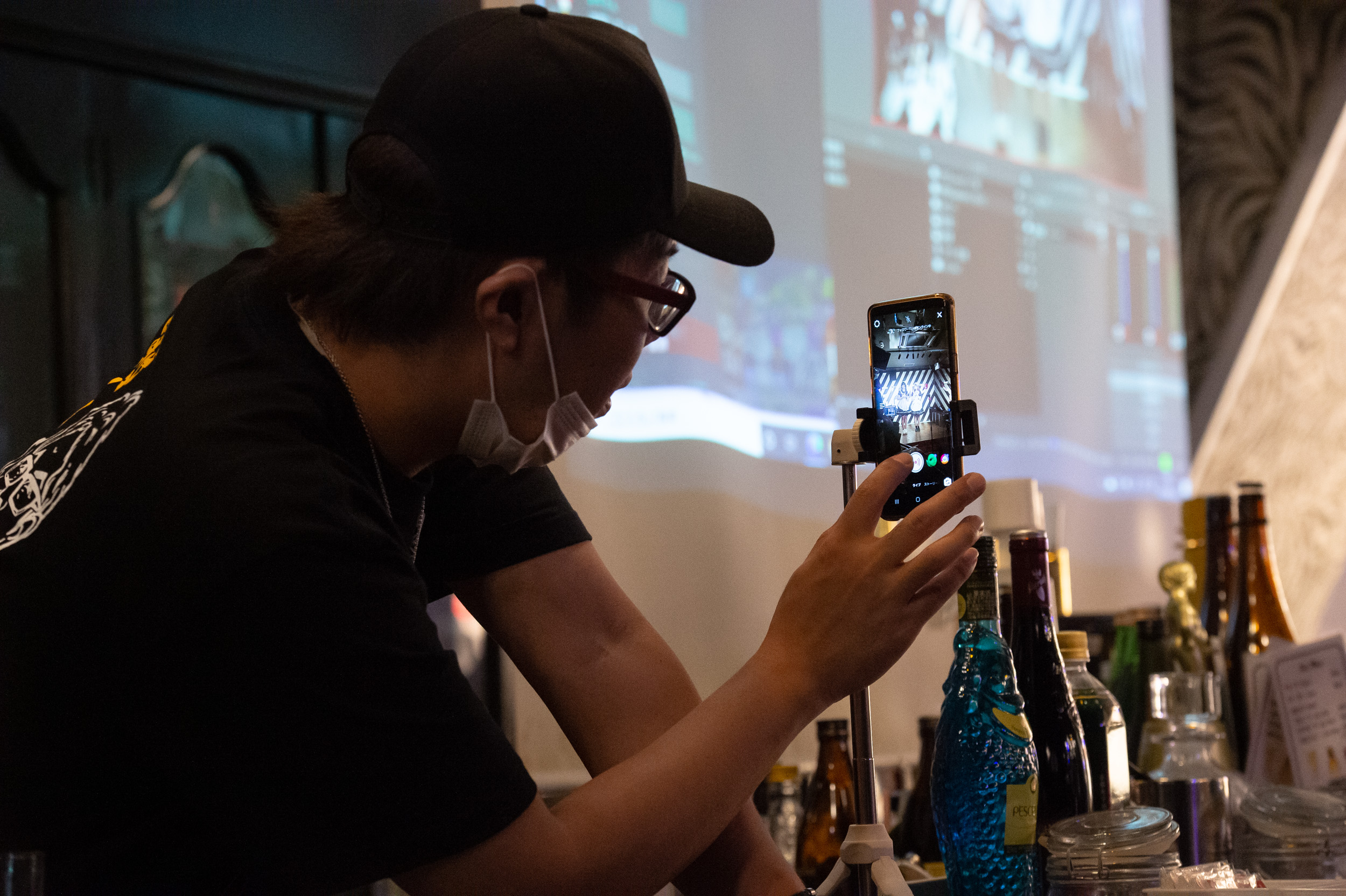 The moderator, the judges and the people in the audience stared at the monitor with a serious gaze. 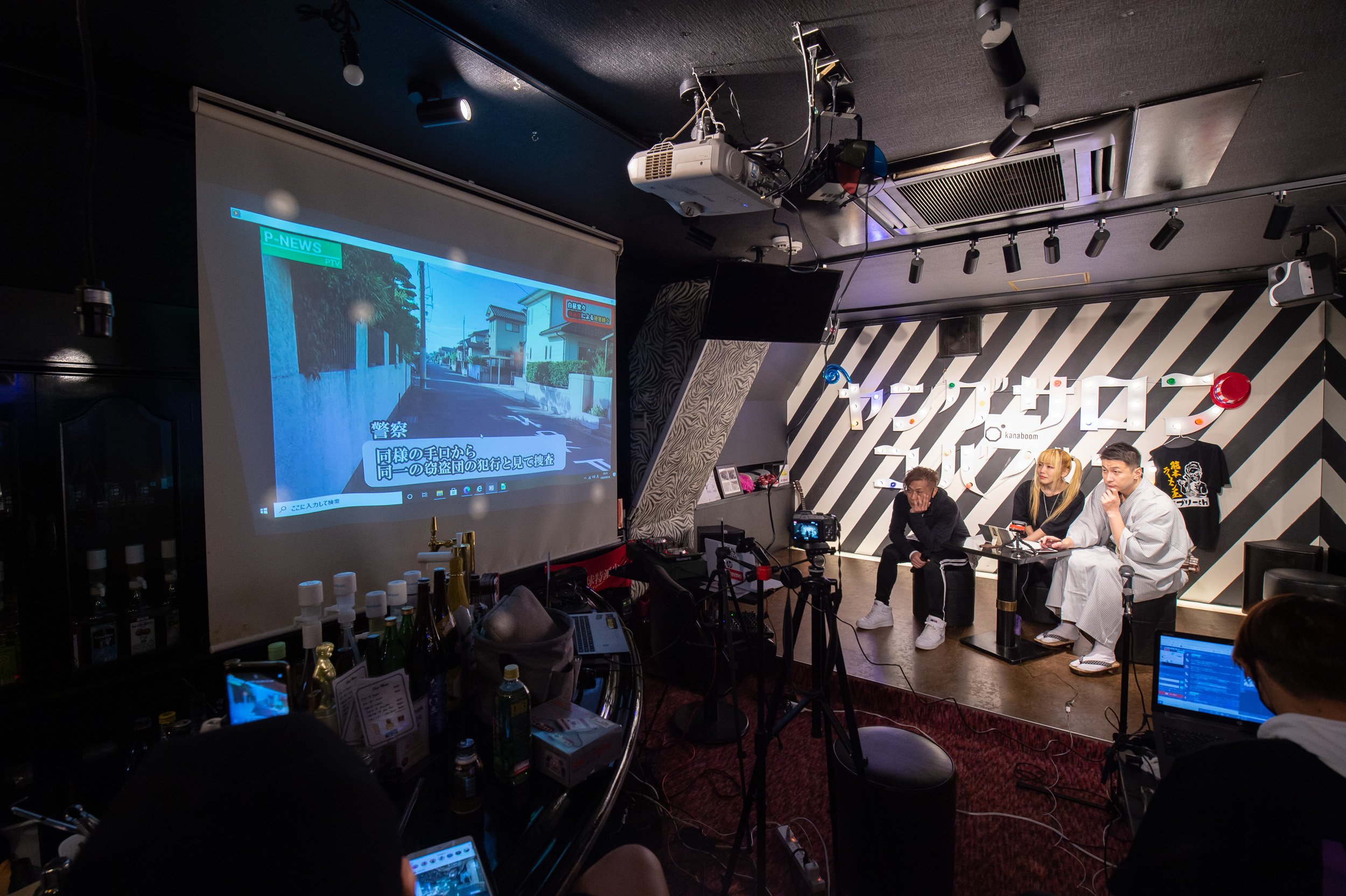 They are still trying to figure out how they can give their best performance to the world in this situation. 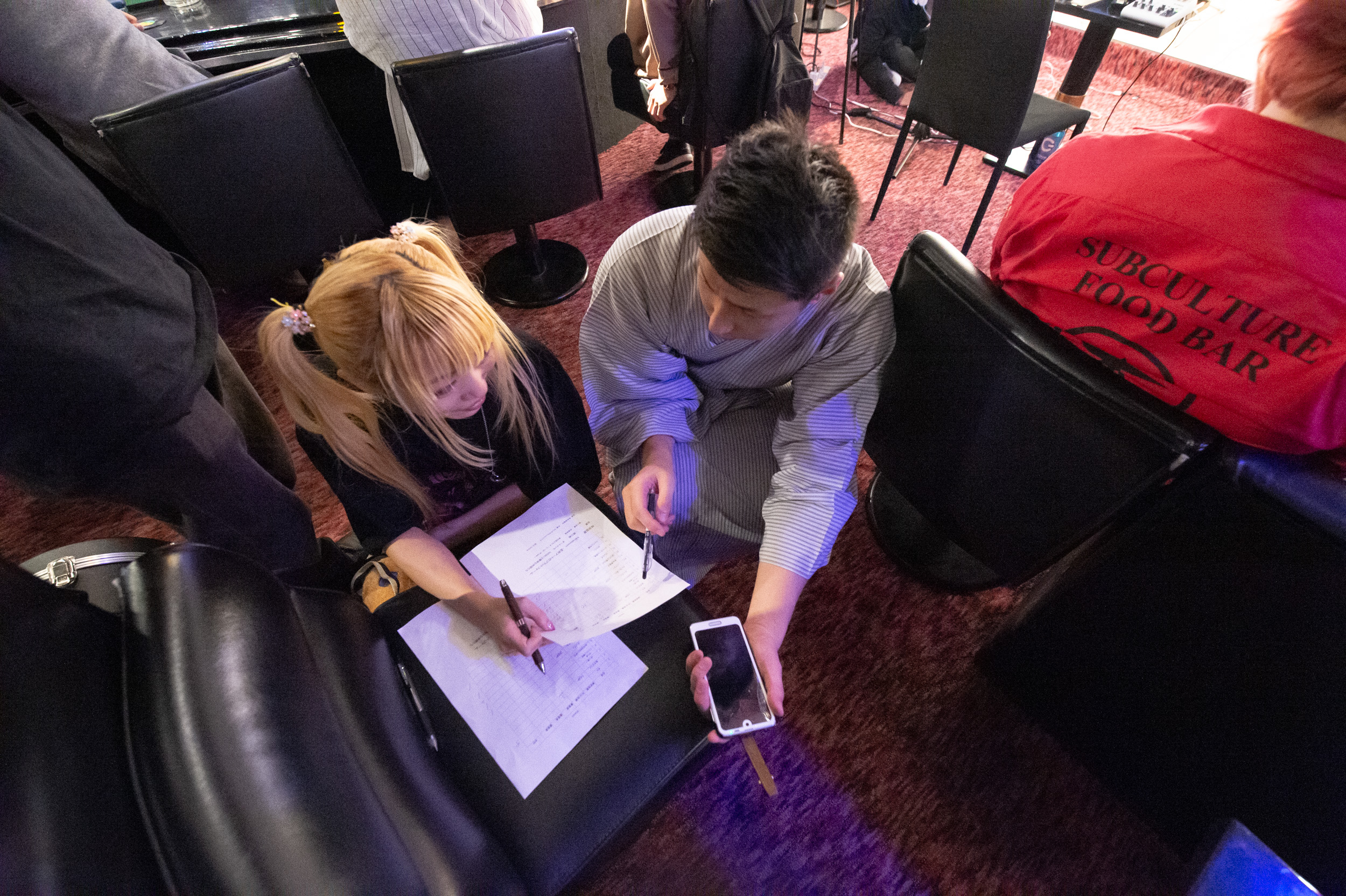 It’s time to announce the judging at the final result summary. It was a thrill.
The MC and the commentators on the stage at the live space (from the front right, Ryoma Hoshino, Takemon Katsura, YU-KI and Toshihide Baba)

The only rakugo storyteller, Takemon Katsura, who is the only rakugo comedian in the show, gives his free talk and comments on each of his comedies.
Mr. Katsura takemon was the one who got the most laughs on the stage.Even if you don’t listen to his talk, you’ll be hooked on his talk. And I can’t stop laughing. 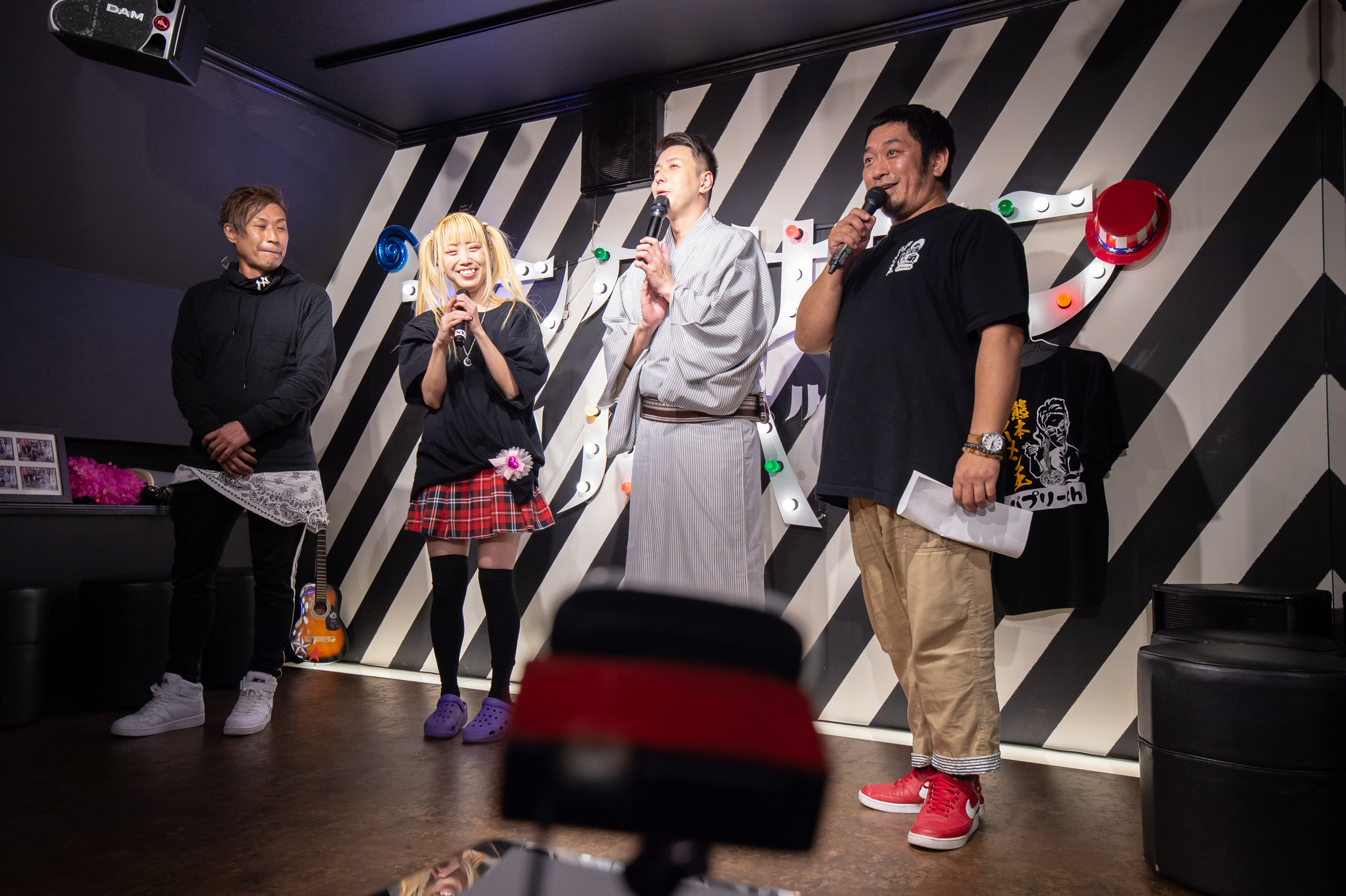 The winner of the Kumamoto PIN-1 Grand Prix 2020 is Mr.Asodog, a bedridden comedian! → Mr. Asodog youtube channel
He is one of the few comedians who matched kanaboom’s message alive with his comedy art (talk).
Congratulations! 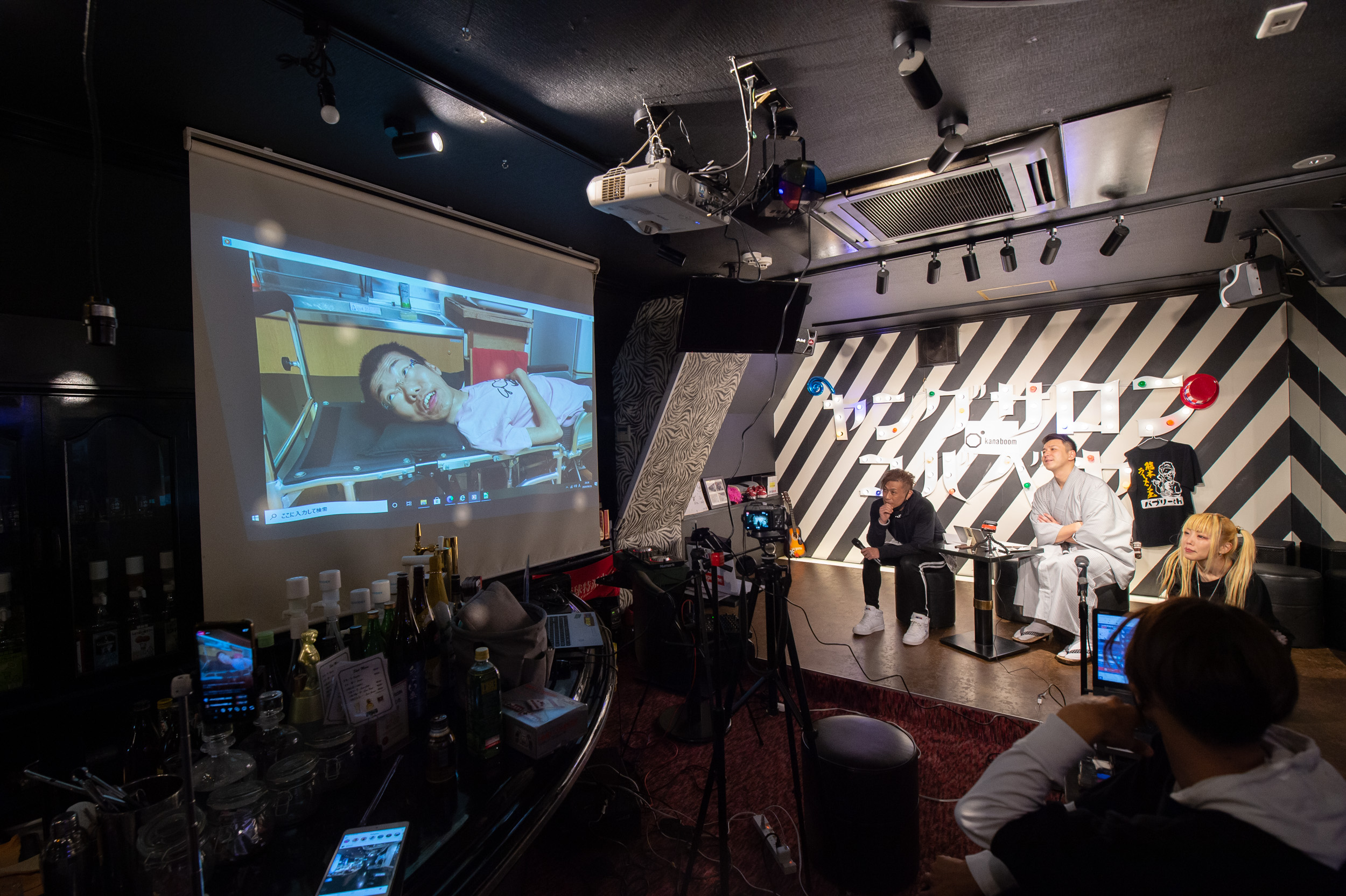 Quarterly magazine edited by Mr. Ryoma Hoshino, The publication of “welcome Jibirds Cafe” will cease after the next issue.
It has been published as a free newspaper to send out information from the young to the elderly and has been popular with the local people for a long time.

and, The  top page of last quarterly magazine ”Welcome ！ Jibers Cafe” will be Famous artist from Kumamoto！
Mr. Ichiro Tsuruta (born in Amakusa, Kumamoto prefecture), famous for his beautiful paintings of Noevia（ Japanese cosmetic companies） commercials and his paintings of the Yamaga Lantern Festival and other beautiful women painters.

I felt the joy of being connected to art from such an encounter.
his work was used in the “Cosmetic Renaissance” series of commercials for Noevir, which lasted from May 1987 to November 1998, and her work was instantly sparked.
He refined beauty and design are highly regarded.